We are a team of dedicated professionals,
ready to do what ever it takes to make your business grow.

I have been quite keen on mathematics and mathematical courses such as real analysis, general/algebraic topology, and functional differential equations. I have been working constantly and voraciously on dynamical systems analysis in the state spaces, algebraic methods for polynomial systems analysis, and stability theories of motion over the last few years. Furthermore, I have acquired a decent understanding of the common fields in system and control theory. My two current research topics are as follows:

Firstly, I have been involved in the research about finding an algorithm method for analysis of equilibrium point of quasi-homogeneous systems as an important part of autonomous systems, related to Hilbert’s 16th problem and Arnold’s question, associated with the indirect method of Lyapunov.

Secondly and recently, I have become, wholeheartedly, fond of studying neuroscience as a multidisciplinary field, which I believe it will be significantly influenced by dynamical systems theory. Hence, I have been actively engaging in the research about modeling of the neurons, especially located at V1, and optic nerves and also investigating methods for stimulation of the nerve cells such as TMS and Optogenetics. 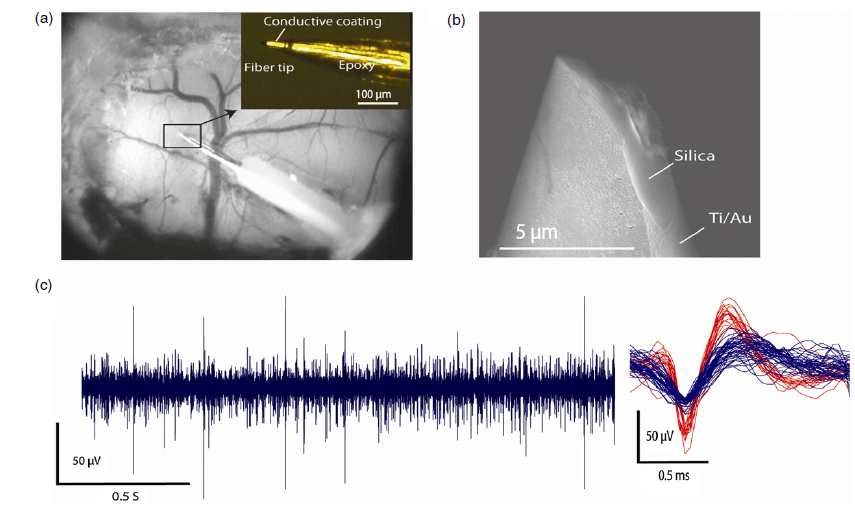 Figure 1: (a) Optical images of an in vivo electrophysiological recording tool being slowly driven into the cerebellar cortex of an anesthetized mouse. (b) SEM image showing that the diameter of the aperture is about 10 μm in this tool. The metal coating around the tapering tip, except the aperture, is indicated. (c) Examples of in vivo recording from it.
]
Menu