Hard disk servo systems play a vital role for meeting the demand of increasingly high density and high performance hard disk drives. The servo system must achieve precise positioning of the read/write head on a desired track, called track following, and fast transition from one track to another target track called track seeking. The seeking time, should be minimized for faster data transmission rates. Because of the different control objectives in seeking and following modes, many drives use mode switching control (MSC) to accomplish both tasks. There are several attempts to develop unifying control algorithms, which work for both track seeking and following.

In this research a unifying controller structure is used based on Adaptive Robust Control (ARC). The algorithm is easily implementable as a unified embedded controller on both seeking and following modes. The proposed new ARC controller has important advantages such as separating robust control design from parameter adaptation process, reducing the effect of measurement noise on the tracking, making adaptation process faster, and reducing the need for feed forward control in seeking time. The controller also takes into account the delay in seeking time, the model uncertainties and the effect of pivot friction. In order to fulfill high performance requirements, the model considered in controller performance verification, includes most significant nonlinear effect, namely the friction and high frequency resonant, hence the simulation results are promising to work well in practice.To increase the Hard Disk Capacity a very precise tip motion control of the Hard disk read/write head tip is required. This accuracy requirement is increasing by ever increasing hard disk capacity, and for commercial hard disks it is now a few microns. Considering the speed of the disk, and very minor air gap between the disk and read/write head, reaching to this accuracy is very challenging, and comparable to maneuvering a F16 military aircraft within a few meters above the ground!

The dual-stage actuation system offers one way to enlarge the servo bandwidth. Using high bandwidth secondary actuators mounted on the voice coil motor (VCM) has been investigated for many years, and is regarded as a feasible alternative to single stage servo systems. In this line of research, a dual-stage hard disk drive system is considered, in which a push-pull type piezo-electric transducer (PZT) is used as a second-stage actuator, in addition to the first-stage VCM. The VCM has a large operating range and a low resonance frequency, and is used for coarse positioning. The PZT actuator has a small operating range and a high resonance frequency, and is used for fine positioning. 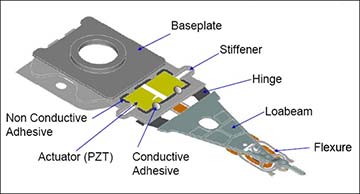 As explained in above, adaptive robust controller are developed for single-stage hard disk servo systems, and by introducing dynamic adaptation into the adaptive structure of such controllers promising results in terms of fast and accurate tracking performance in presence of modeling uncertainty is obtained. In this research, this approach is implemented for the dual-stage disk drive servo system, and its closed loop performance is compared to that of ARC in presence of modeling uncertainty. To verify the robustness of such algorithms, experimentally verified models for the system, is used in the simulations. The simulation results applied on this model is promising to work well in practice. This topic is currently under further developments. For the obtained results so far, refer to the following publication.

In this research group we enjoyed collaborating with internationally recognized researchers including Herrmann, G.; Turner, M.C.; Postlethwaite, I.; Guoxiao Guo.